One day somewhere around December 2, 2014,  I received a call from one 'profie' a junior of mine to meet him at KL International Hotel. I posted a brief session with him "A short nite-out with Assoc Prof Haji Zaidi Md Zain " in Facebook. He was on a trip for his 'cranky sickness' together with his family. He was also my junior in Putra English School and MRSM PC  in the 70's. The moment we met he was talking about the memories way back in Pengkalan Chepa, and how he always remember the day MRSM PC beat SMS Kelantan (for the first time ever) while the rest was history.  He was also keen on my writings and would like to see 'a memoir' of the 7-men army or the '7 Samurai of MRSM PC 73'.

I am really not sure if I could remember the 70's to the near 80's where 1977 was the last time I was in the 'memorable college'. Before we left, I am still thinking of what to start with, I dont even remember the day MRSM PC was established, but I do have the feel that I do need to 'walk the mile'. When I reached home, of course my old ever faithful , my PC was the first that I looked for. I went through the pictures I kept and started to hunt for some notes (in case there are any). 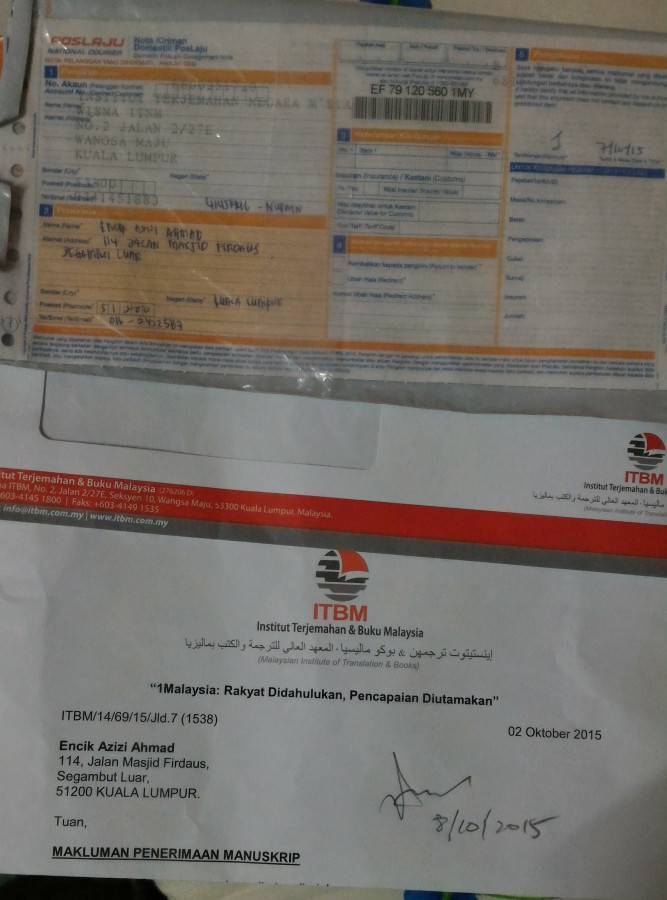 The first few lines, doesn't fits well, ... off to sleep of course. The days goes by, I finally remember 'old buddies' of mine, the likes of Tuan Mohd Sahrom Gorg, Tuan Haji Subri B and few others. I talked to them and chatted for chances of ideas that may be up. I did get some hangout with Tuan Mahadzir Othman (one of my junior of 74, a veteran of script writing) who put up some ideas for me.

But still , how much can you get if it comes only from 3-4 friends, I started calling up friends of MRSM PC 73 but to no avail, It was a let down. Most will come up with 3-4 lines and expected me to finish-off with the paragraphs. It doesn't go on well too, as I was on another writing titled E-Dagang (E-Commerce) for Polytechnic students.

The mind keeps ticking, I need to finished up the 'assignments', I need to do something,for no one put up writings on MRSM PC (though many are found in 'blogs'), I did found writings on MCKK (especially by Rafizi Ramli) and I must proceed, I must prove that something need to be jotted down, no matter whether the lines are good or bad, someone , somewhere, somewhat need to be done.

I went to libraries around to modelled-out writings on alumni, a bit of walking-down-the lane type of writings; days passed, still waiting from the alumunus but the saying says 'you'll have to start first'.

We met again one nite, and I put-up some messages thru but no one give a damn. Sad, broken-hearted, no way, I told myself just do it. I overheard a 55th year re-union will be held somewhere in August 2015; but finally forwarded to the 16th October, 2015 in Shah Alam.

It was the mid-semester holiday when I was on a one-week break that I finally tried out to a new 'publisher'. I met a pretty young lady and showed her 'the draft', at that time I was about 8 to 9 chapters of writing. She mentioned that it was okay and it was quite a lot for a memoir. I promised her I will finished up the chapters and by October 1st, 2015, I did submitted 'the draft' through e-mailing.

The writings were based on what I remember and know. My prayers, in syaa Allah. I am not sure how will it be, I had done what I think I had to do, be it a memoir, or maybe a short-written history, a penning of past tales, just praying.

Eventually, at about 3.30pm today, I did called up the 'lady of ITBM", asking whether she received my posting and status; all she said was 'it's now under evaluation and will take a-month' before some green or red sign will be given. I thanked her for the remarks and I did the same on E-Dagang and was told it's 70% under an officer.

As soon I reached home my daughter told me a Pos-Laju letter's on the table, and this is what I see .... 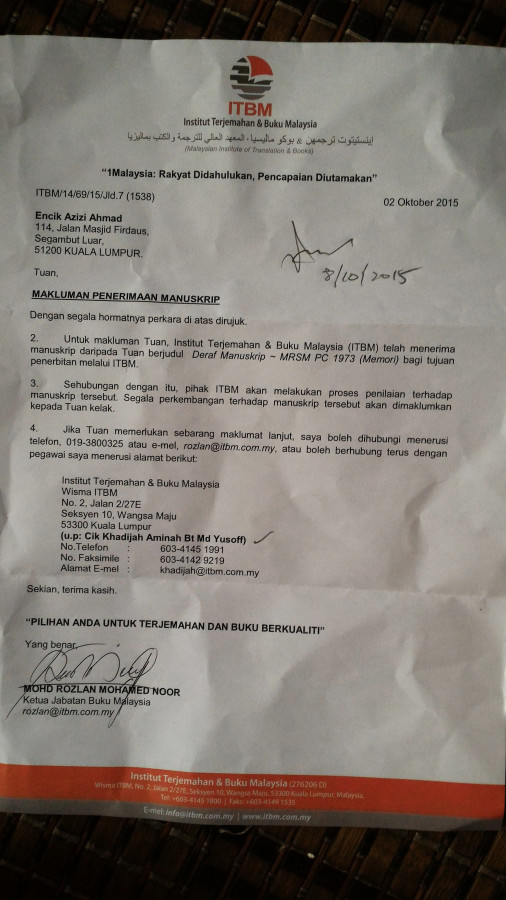 Should it be a writing, a tale or whatever I do pray it can be in the market, in syaa Allah, if not the legacy of the MRSM PC's elders will not be in the history ... Follow me on Academia.edu
Tags: buku, mrsmpc73, writings
Subscribe

Posts from This Journal “mrsmpc73” Tag