16 October 2016 was picked to be the date for 55th birthdays for the alumnus of MRSM PC 1973 to foster the 42 years of friendships (since 1973). Acappella Suite Hotel , Shah Alam was picked as the venue. The idea was brought up 4 months ago by several of the the corporate members of the alumnus and together they put up the show for the members to meet, in syaa Allah.

To date the response is good, as some of the members were those who we had not seen for the past 40 years or so. We do not know of the activities tonite but what we are looking forward is 'to meet again'. Some prefer not to be present as they had their own things to settled, such as family business, own world of their own, inferiority complex, don't care, 'go to hell' and etc, but those who will be appearing tonight would surely be assured that the night will be a 'memorable night'.

Still few more hours to go, I will continue to write soon, in syaa Allah. 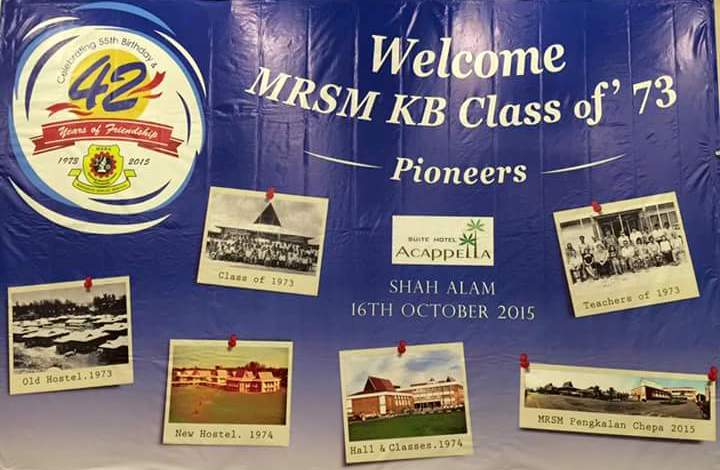 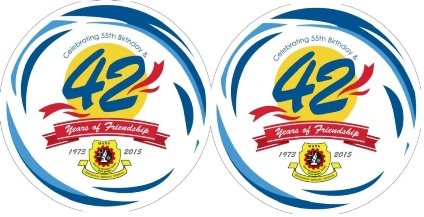 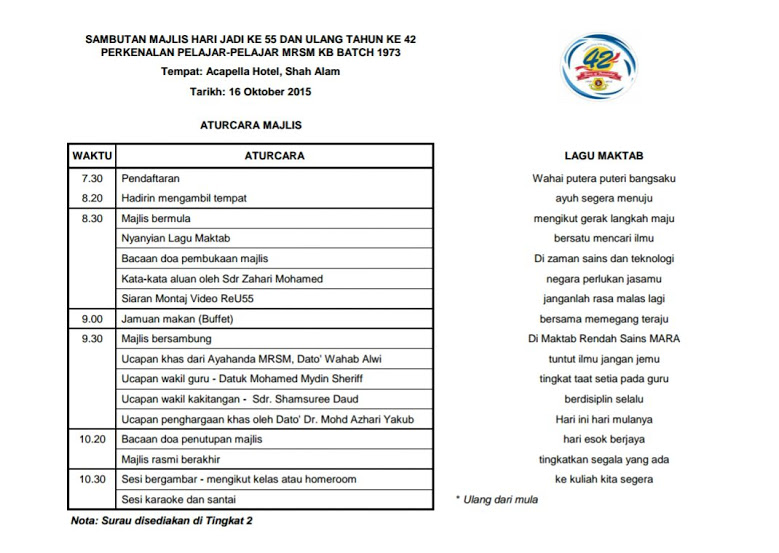 The planned activities
As soon as I reached home at about 5.25pm, I am still in doubt whether I should go or attend the occasion. So far I had not heard anything from the committee as I did not join the MRSMKB73 WhatsApp group. I had told the members, should you want to call for an occasion like this, things should be posted or shared through WhatsApp, e-mail and Facebook.

But knowing that, the occasion's is organised by the 'corporates' and knowing that we only have to attend, I just keep things to myself. After all the 'commitee' had put their effort, energy , time, money and etc to make the occasion happened, so all you need is to attend as a show of support.

My wife asked me whether her 'friends' will be there or not, her friends are the wives of the members of the alumnus of course. I checked the list of people going and I told her that, most will be coming. She asked me wheter she can join me at the last hour. I quickly contacted Haji Majid and Datuk Haji Zainal, and the answer was favourable. I thanked them and told her to be ready to join me. She quickly make herself ready and by 6.00 pm we're ready to go.

As we took the road, rain started pouring and we were backed home again as the traffic were at still. I called Azman Yusoff to know where he is, he told me he's still at home and couldn't make his move. We decided to wait until the rain stopped and after the maghrib prayers.

Maybe Allah wanted us to be calm and relax and not rushing to the meet. As maghrib's about 7.02 pm, we prayed first and as soon as we finished our prayers, alhamdulillah, the rain stopped.
We took the road again, and again the traffic's slow, be we managed to be by the Jalan Duta Toll at about 7.15 pm and it took us 15 minutes to passed thru the toll of a distance of 1 Km.

By 7.32 pm, we are on our way to Shah Alam and again it took us almost an hour to reached the destination, and finally alhamdulillah by 8.30 pm we were at the Acapella car park, and Haji Sobri Ngom and wife plus Haji Salehin was a minute or two behind us. We quickly headed our way up to Seraya Ballroom at 2nd Floor.

We were to take up our goodies and a snap of myself (selfie) before proceeding to where everyone was already in. As soon as we entered the ballroom, the crowd were up standing and singing the Lagu Maktab, and Arwah Abang Ariffin's face quickly popped into my mind. Few years back, we were singing together at Bora Ombak Ampang, for the 73's occasion too. Al-Fatihah to arwah.It was followed by a short doa selamat by the faithful Haji Ramlan Rosli and Mamak Zahari again was given the task to officiate the 'majlis' as the 'mamak presiden' dulu, kini dan selamanya.

I was on my rounds to meet friends and colleagues, not caring much about the speech and the montage shown. Of course, meeting again 'friends' who are long gone, not seen for the past 40 years was a memorable moment. The likes of Abd Wahab Rajab, Mohd Zahar Yahya (Panjang), Kamaruzaman Mamat (Mae Mamba), Alwi Dicu Ayob, Dr Adli Mustafa, Cikgu Nassli Ani, Zakaria Ibrahim and few others are a good sign indeed. In addition to see friends bringing their wives and kids are also most welcoming. Based on the list, the numbers are very encouraging, kind of showing that the batch of 73 do have the spirit of being together.

Likewise, there are those who said they will be present but were not present as family commitments, business commitments and sorts of reasons were given. But who cares, to those who were present , thank you, arigato as the nite seems to be a nite to meet.
The people who will be coming 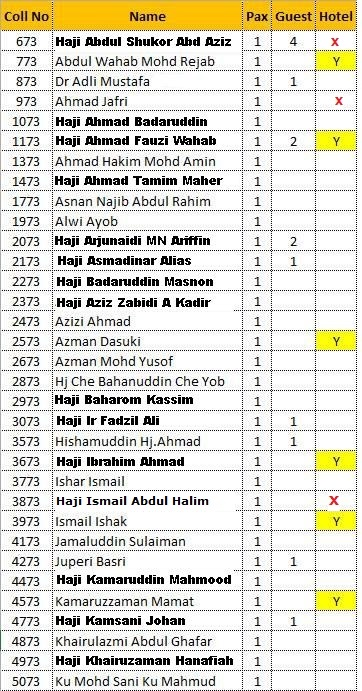 Haji Abdul Shukor Abd Aziz had to attend to one of his 'kitchen'; Ahmad Jafri was not around but the presence of Prof Dr Adli Mustafa (USM) who was not around for quite a number of years looked alright. Cikgu Abd Wahab Rajab who now owned a handphone can be a transformational history. Alwi Ayob still looks 'energetic', Haji Arjunaidi brought 'two stoves,

I brought my missus and so do Azman Dasuki who came all the way from Medan , though not listed in the list.
We are not worried of people not coming, we are more to meet each other, to be together for this few hours.

Rumah 4, should be applauded if not for the 'disappearance' of Tuan Haji Ismail Halim.

The analysis showed 60 percent of the 1 to 50 group were present , though some went missing but still the showing is considered good.

With only one PhD holder, but this group do have consultants in the engineering field.

Business minded , a number can be seen , anyway something to write about in the later stages. 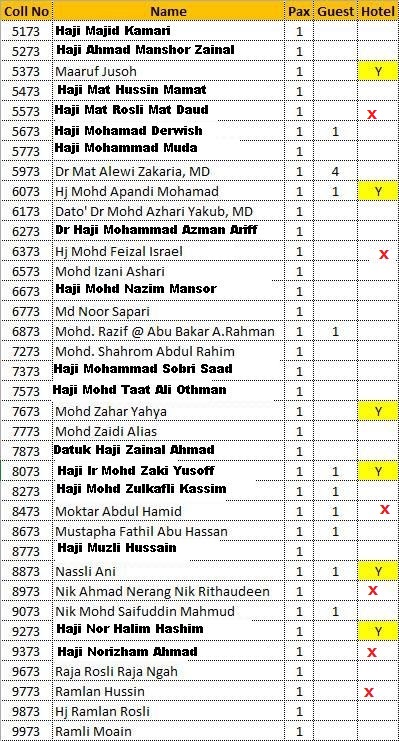 Corporates can be seen here too. Not forgetting 'the millionaires' are here too.

The mixtures looks good for in the graph, almost normal distribution curve if put up in graphs.

The 'loudest' comes from this group too and the 'silent' are also here.

The golfers club are from this group. With one of the longest missing person was found recently myabe the group may put up another episode for tales.

The 'sulker' also come from the numbers, the once the bold and the successful showed declining state, there are sure ups and downs in our lives, but life still has to go on.

Mixtures of government servants holding high post, and consultants in between, we surely do have to depend on this group at times.

Any meetings or occasions held, please dont leave this group, they will of course be there when you need them, the strength of unity maybe comes from the middle table, maybe the theory of wassatiyah can be applied if called for.

The group also represents people 'dari Perlis sampailah ke Sabah', but sad to see the Sarawakian was not present for the occasion except  from table 1 to 50.

A number who said they will be present did not turned up but then again, in syaa Allah  , there wiil be  a next time. 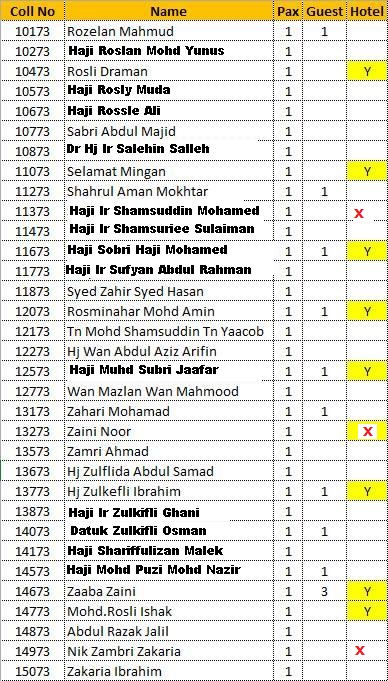 The group stands to be the quiet group too except for some fews.

A number of 'Ir's  can also be found here. A number were JKR and TNB engineers .

An equal dsitribution in career wise, covering all sectors.

Gracing the nite, I guess time's not on our side, but nevertheless the commitee had put up a great job in organising the event.

Sponsors are kind enough to sponsored up the lodgings, foods, entertainment, a big thank you from all of us.

One good thing is with strong support and backing from the 'corporate team' and the spirit of friendships that was displayed, we do hope the next occasion will be more successful as in the case of us turning 60.

One of the most wonderful part of this reunion was the presence of a number of retired teachers. The grand uncle Dato Wahab Alwi, Dato Mydin Sheriff, Mr Aw Dai Kooi, Mrs Aw Joyce Yeo Bee Cheng, Hajah Wan Tik Sakinah, Puan Kamariah Mohd Amin, Mr Suresh and wife, Dr Fatanah, Mr Khoo Soo Lee, Auntie Zaharah and etc plus Abang Shamsuri Daud, Apan Pin Caretaker, Pak Mat Junior, Abang Mat Nor and few others were all there to lend their support to these once naughty but now loving students of theirs.

We were thrilled on seeing their old teachers and the teachers were very excited on meeting the old students. The happiness on the faces was evident. Most were indeed very happy on meeting their colleagues.  All the retired teachers were presented with momentos for making their presence felt inspite of distance and ill health.

We wished to thank each and every teacher who made it possible. Tokens was also presented to each and every pioneer student and the subsequent entertainment and dinner was appreciated by all.

Let's be committed and be the best friends forever,  be it for the better or for the worst.

See everyone there... in syaa Allah and alhamdulillah the event goes on well.
Tags: mrsm, mrsmpc73
Subscribe

Posts from This Journal “mrsmpc73” Tag