Dealing with bullies at work

BULLYING does not happen among children only. It also happens among adults in the workplace, resulting in similar harmful consequences to the victims such as anxiety, low self-esteem, psychiatric damage and even suicide.

Bullying in the workplace manifests in constant nit-picking over trivial matters and destructive criticism, combined with a refusal to value or acknowledge the performance and achievements of the victim.

The bully will attempt to disengage his or her victim by turning associates against the individual. Gossipy tidbits may be spread about a victim’s emotional wellness or capacity to carry out his work.

Bullying can be a drawn-out and subtle process, so it is often difficult for others to know exactly what is going on. But it is possible to identify certain conditions in which bullying can flourish.

A major reorganisation exercise or the appointment of a new manager or head teacher is a common trigger. Bullying among staff is also closely linked to an “unhappy” environment, although it’s not clear whether the bullying is the cause of disaffection or the result of it. 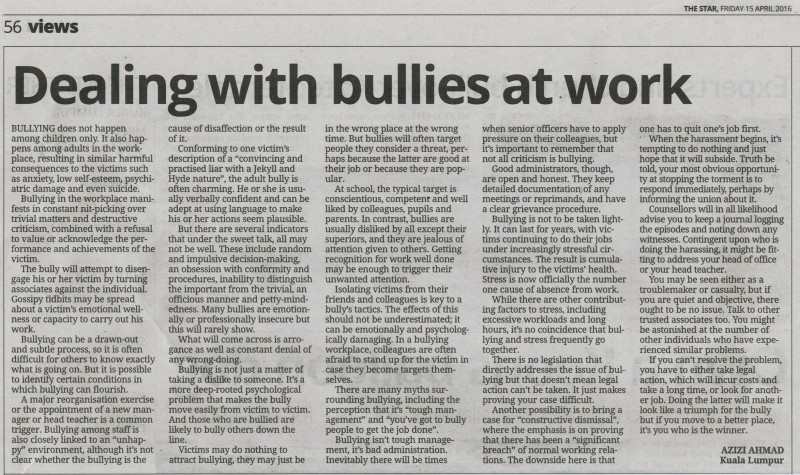 Conforming to one victim’s description of a “convincing and practised liar with a Jekyll and Hyde nature”, the adult bully is often charming. He or she is usually verbally confident and can be adept at using language to make his or her actions seem plausible.

But there are several indicators that under the sweet talk, all may not be well. These include random and impulsive decision-making, an obsession with conformity and procedures, inability to distinguish the important from the trivial, an officious manner and petty-mindedness. Many bullies are emotionally or professionally insecure but this will rarely show.

What will come across is arrogance as well as constant denial of any wrong-doing.

Bullying is not just a matter of taking a dislike to someone. It’s a more deep-rooted psychological problem that makes the bully move easily from victim to victim. And those who are bullied are likely to bully others down the line.

Victims may do nothing to attract bullying, they may just be in the wrong place at the wrong time. But bullies will often target people they consider a threat, perhaps because the latter are good at their job or because they are popular.

At school, the typical target is conscientious, competent and well liked by colleagues, pupils and parents. In contrast, bullies are usually disliked by all except their superiors, and they are jealous of attention given to others. Getting recognition for work well done may be enough to trigger their unwanted attention.

Isolating victims from their friends and colleagues is key to a bully’s tactics. The effects of this should not be underestimated; it can be emotionally and psychologically damaging. In a bullying workplace, colleagues are often afraid to stand up for the victim in case they become targets themselves.

There are many myths surrounding bullying, including the perception that it’s “tough management” and “you’ve got to bully people to get the job done”.

Bullying isn’t tough management, it’s bad administration. Inevitably there will be times when senior officers have to apply pressure on their colleagues, but it’s important to remember that not all criticism is bullying.

Good administrators, though, are open and honest. They keep detailed documentation of any meetings or reprimands, and have a clear grievance procedure.

Bullying is not to be taken lightly. It can last for years, with victims continuing to do their jobs under increasingly stressful circumstances. The result is cumulative injury to the victims’ health. Stress is now officially the number one cause of absence from work.

While there are other contributing factors to stress, including excessive workloads and long hours, it’s no coincidence that bullying and stress frequently go together.

There is no legislation that directly addresses the issue of bullying but that doesn’t mean legal action can’t be taken. It just makes proving your case difficult.

Another possibility is to bring a case for “constructive dismissal”, where the emphasis is on proving that there has been a “significant breach” of normal working relations. The downside here is that one has to quit one’s job first.

When the harassment begins, it’s tempting to do nothing and just hope that it will subside. Truth be told, your most obvious opportunity at stopping the torment is to respond immediately, perhaps by informing the union about it.

Counsellors will in all likelihood advise you to keep a journal logging the episodes and noting down any witnesses. Contingent upon who is doing the harassing, it might be fitting to address your head of office or your head teacher.

You may be seen either as a troublemaker or casualty, but if you are quiet and objective, there ought to be no issue. Talk to other trusted associates too. You might be astonished at the number of other individuals who have experienced similar problems.

If you can’t resolve the problem, you have to either take legal action, which will incur costs and take a long time, or look for another job. Doing the latter will make it look like a triumph for the bully but if you move to a better place, it’s you who is the winner.

Posts from This Journal “bullying” Tag