At the PowerPoint of no return

Hello, everyone. As usual our session today is …. “Okay, open your eyes, put on your ears and please pay attention. Should you have any questions just raise your hands”.

That’s every time when we educators start our lesson. And most will be handling the PC desktop and engaging it to the portable projectors and of course using PowerPoint presentations.

So, are we really giving lessons to the students and doing to the way we think and speak. 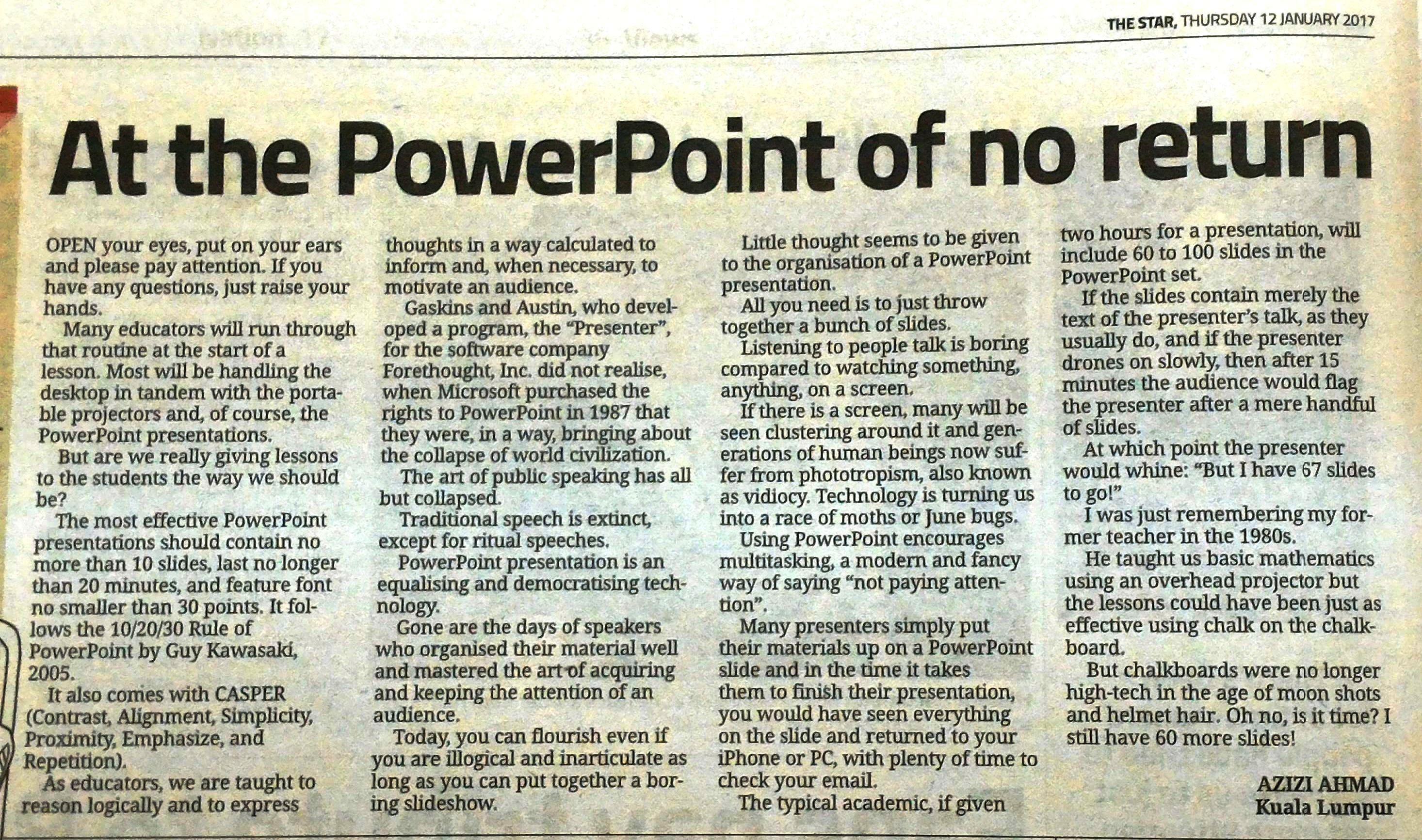 The most effective PowerPoint presentations should contain no more than 10 slides, last no longer than 20 minutes, and feature font no smaller than 30 points. It follows the 10/20/30 Rule of PowerPoint by Guy Kawasaki, 2005.
Also it comes with CASPER (Contrast, Alignment, Simplicity, Proximity, Emphasize, and Repetition)

As educators, we are taught to reason logically and to express thoughts in a way calculated to inform and, when necessary, to motivate an audience.

Gaskins and Austin, who developed a program the ‘Presenter’ for the software company Forethought, Inc., did not realize, when Microsoft purchased the rights to PowerPoint in 1987 that they were in a way bringing about the collapse of world civilization.

The art of public speaking has all but collapsed. The traditional speech is extinct, except for ritual speeches.

PowerPoint presentation is an equalizing and democratizing technology.

Gone are the days where by speakers that organized their material well and mastered the arts of acquiring and maintaining the attention of an audience.

Today you can flourish even if you are illogical and inarticulate, as long as you can put-up together a boring slideshow.

One thing for sure, no thought need be given to the organization of a PowerPoint slideshow, all you need is just throw together a bunch of slides.

Listening to people talk is boring, compared to watching something, anything, on a screen.

Should there be a screen, many will be seen clustering at it, and generations of human beings now suffer from phototropism, also known as vidiocy.

Technology is turning us into a race of moths or June bugs.

Many presenters simply put their speeches up on a PowerPoint slide and as the member of the audience read the words on the slide and the time it takes the presenter to read them, we can read everything on the slide and return to your iphone or PC, with plenty of time to check your email or go chatting.

The typical academic, if given two hours for a presentation will include at least 60 to 100 slides in the PowerPoint set, and if the slides contain merely the text of the presenter’s talk, as they usually do, and if the presenter drones on slowly according to the received custom, after fifteen minutes the audience will flag the presenter after only a handful of slides. At which point the presenter will whine, “But I have 67 slides to go!”

I was just remembering my former teacher in the 1980s. He taught us basic math by using an overhead projector and could have been just as effective using chalk on the chalkboard. But chalkboards were no longer high-tech in the age of moon shots and helmet hair.

Posts from This Journal “ict” Tag