PUTRAJAYA: No 'most straight A' scorers, no 'best schools'.

For the first time since 1987, there was no special emphasis given to the academic achievements of students in the annual announcement of the Ujian Pencapaian Sekolah Rendah (UPSR) results.

Not only were there no mentions of best schools or states with the most straight 'A' scorers, there were also no statistics of rural-urban school comparisons, nor school-to-school match ups.

Amin said from this year onwards, the annual announcement will comprise not only the UPSR exam results, but also feature three other components.

As for the UPSR examination, emphasis was only given on the minimum standard achievement. Students, he said, are required to obtain at least a 'D' in all subjects.

Amin said the percentage of students who did not achieve the minimum standard in any of the subjects also saw a fall of 0.7 per cent with 1.5 per cent (6,663 students) this year compared to 2.2 per cent (9,519 students) last year. 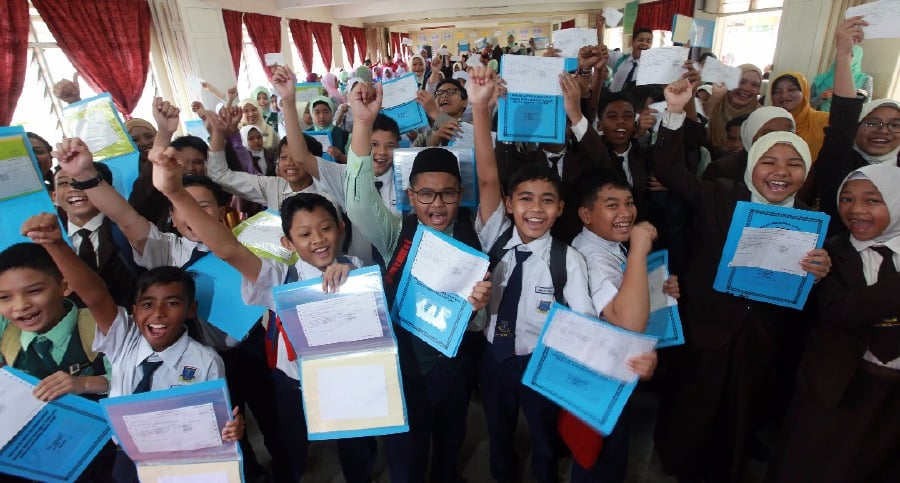 There no mentions of best schools or states with the most straight 'A' scorers, there were also no statistics of rural-urban school comparisons, nor school-to-school match ups. (pix by FARIZUL HAFIZ AWANG)

At national level, Amin said a total of 8,958 students scored straight A's this year compared to 4,896 last year. This is an increase of 1 per cent.

Meanwhile, for the physical activities, sports and co-curricular assessment (PAJSK), he said 24,612 (5.6 per cent) students were classified as 'very active and committed' in co-curricular involvement and exemplied individual potential in the activities joined.

For the psychometric assessment, candidates were tested on multiple intelligence inventory.

"Another 63.2 per cent were deemed naturalistic, 54.4 per cent kinesthetic, 50.3 per cent showed tendency towards mathematical logic and 43.4 per cent towards visual space," he said.

In the fourth and final assessment, which is the classroom assessment, he said students' achievements will be evaluated and handled by their respective school.

Amin said that in summary, the students' PSSR performance w

as good and will pave the way for even greater improvements in the future.

He noted that it would not be fair to evaluate students based on their academic achievements alone and that consideration must be given to their total development including physical, emotional and spiritual aspects.

"Each student is unique in their own way and it is only fair that the evaluation takes note of all their best aspects.

"Everyone should bear in mind that the UPSR is only a checkpoint to measure a student's ability to read, write, count and their reasoning skills during six years of primary education. Priority should be given to students' development as a whole."

Posts from This Journal “assessment” Tag