THE large crowd waiting patiently in front of the United Overseas Bank catches my attention as I slowly guide my car into an empty parking lot near the financial institution’s Alor Star branch located in Jalan Gangsa. Usually there are only a handful of early birds loitering around the main entrance.

I can almost feel the tension in the air as each one of them vie to be among the first to get in as soon as the security guards unlock the heavy glass doors to herald the start of a new business day. Curious to learn more about this unexpected phenomenon, I quietly approach the help desk attendant after getting my queue number. With more than 15 people ahead of me, there’s surely sufficient time to get to the bottom of this mystery. 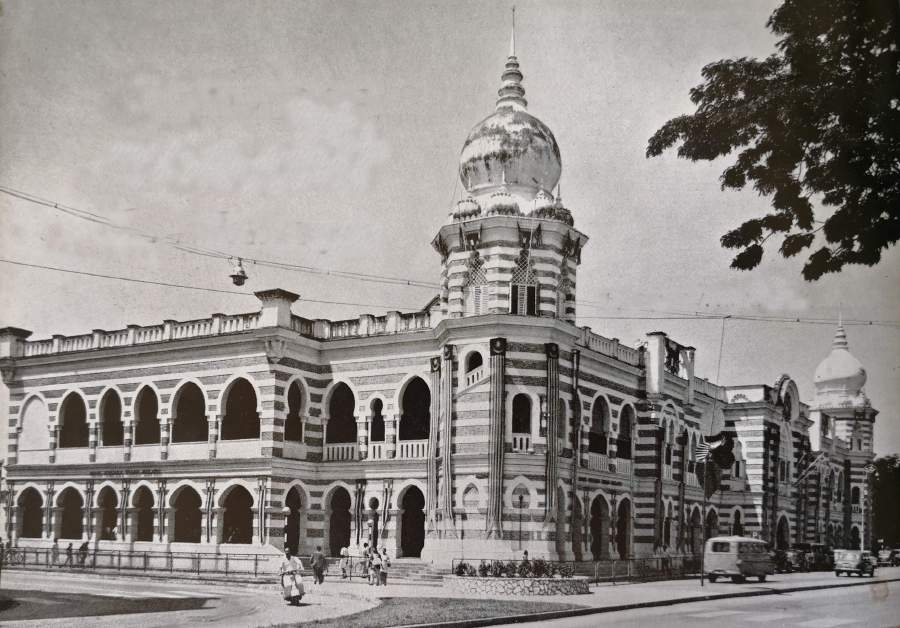 The first office of the Bank Negara in 1959.

It all adds up now. Worried about the newly-minted paper money running out of supply, it’s little that people are flocking to financial institutions all over the country around this time of the year. Hari Raya will not be the same if there are no brand new notes to press into the waiting palms of eager children for duit raya.

Fortunate to locate a recently vacated seat, I wait patiently for my turn. Progress is slow and before long, my mind begins to wander, taking me back to the early days when our country’s founding fathers set the ball rolling for the formation of Malaya’s own Central Bank.

In September 1956, a legislative policy proposal for the establishment of a Central Bank in the Federation of Malaya was issued in the Watson-Caine Report. Within two short years, the Bill to set up Bank Negara Tanah Melayu (Central Bank of the Federation of Malaya) was introduced in the Malayan Parliament by our nation’s first Finance Minister, Colonel Tun Sir Henry Lee Hau Shik on Oct 23, 1958.

In his historic speech, Lee said that Bank Negara’s establishment indicated to the world that the recently Independent Malaya was determined to make sound provisions to put its own financial affairs on a firm foundation.

Lee went on to underscore the fact that the proposed Central Bank was more than an expression of a country’s self-rule. He told lawmakers at that time that the hopes and success of our young nation rested on the formation of Bank Negara as it had a vital function to perform — to grapple with the many financial responsibilities that came with Independence. 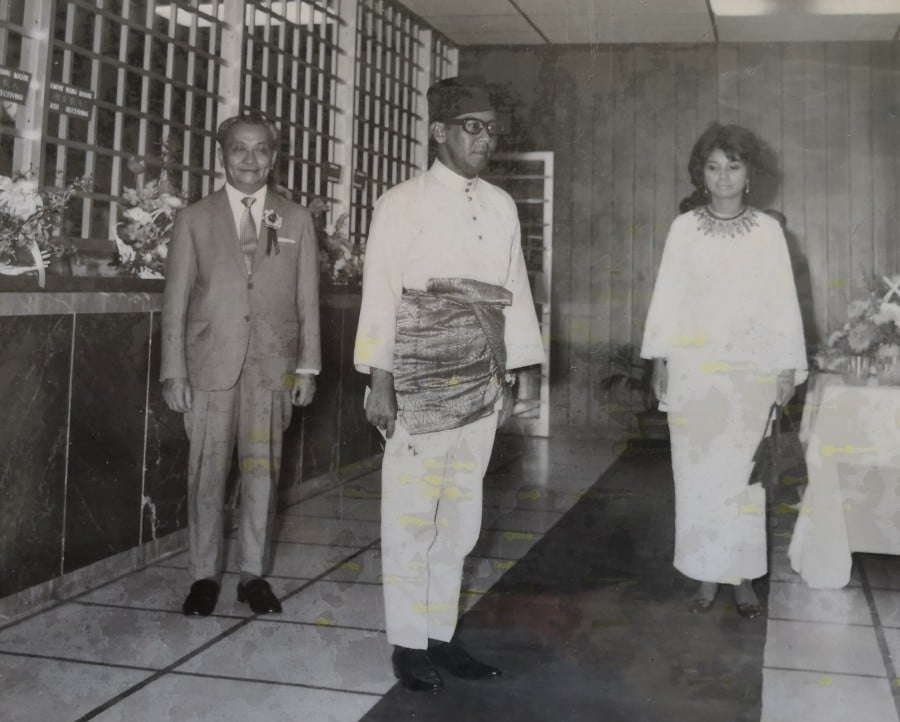 Things progressed at a rapid pace after that and in a little more than three months later, everything was in place. Bank Negara was established with a paid-up capital of $30 million on Jan 26, 1959. Its opening on that day was officiated by the first Yang di-Pertuan Agong, Tuanku Abdul Rahman.

Although Bank Negara was equipped with all the normal powers usually possessed by central banks throughout the world, the charter granting it authority to issue legal tender had to be temporarily put on hold pending the dissolution of the Board of Commissioners of Currency for Malaya and British Borneo. 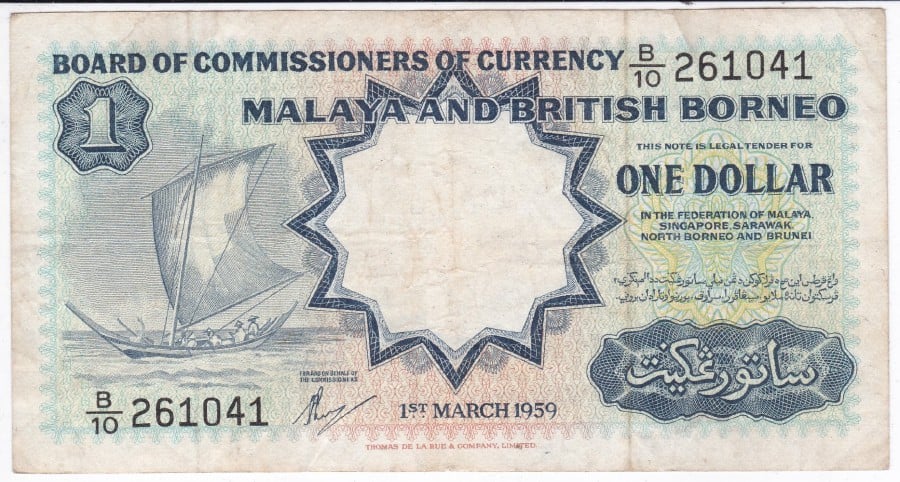 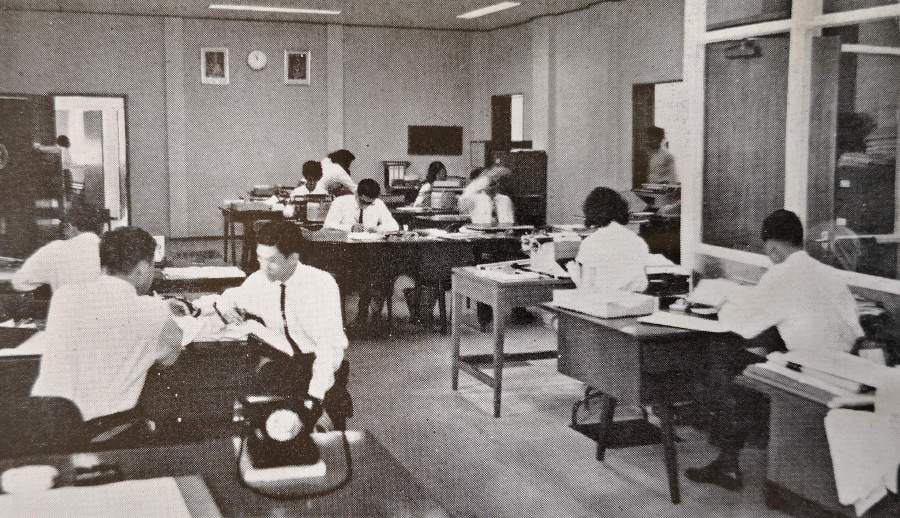 The Bank Negara office was equipped with state-of-the-art equipment when it first opened in 1959.

This interval was, in the opinion of financial experts, a golden opportunity for the authorities to consider carefully matters connected with the Federation’s existing economic and financial ties with Singapore and the other adjacent territories.

Any error in judgement made at that point in time could severely threaten public confidence and create a general feeling of business uncertainty within commercial and trading circles in the region. If not addressed in a proper manner, this would jeopardise confidence amongst foreign investors and traders who may be interested to partake in the future growth of the Federation of Malaya.

Bank Negara’s prudent measures, together with various other equally well thought out policies initiated during its early formative years, were praised by the Bank of England in an article in its quarterly bul¬letin published early in 1960 entitled Currency and Banking Developments in Certain Commonwealth Countries during the past 10 Years.

The British Central Bank’s report noted that, since its inception, Bank Negara made the most progress in its role as the Federation government’s financial agent and advisor. This said volumes about the way the newly-formed Malayan financial administrator had prudently managed the Federation Government’s bank accounts that were previously maintained with commercial banks.

The underlying factor leading to this success was the mutual trust and confidence between the Minister of Finance and the Treasury staff on the one hand, and the Governor and the Central Bank’s staff on the other. 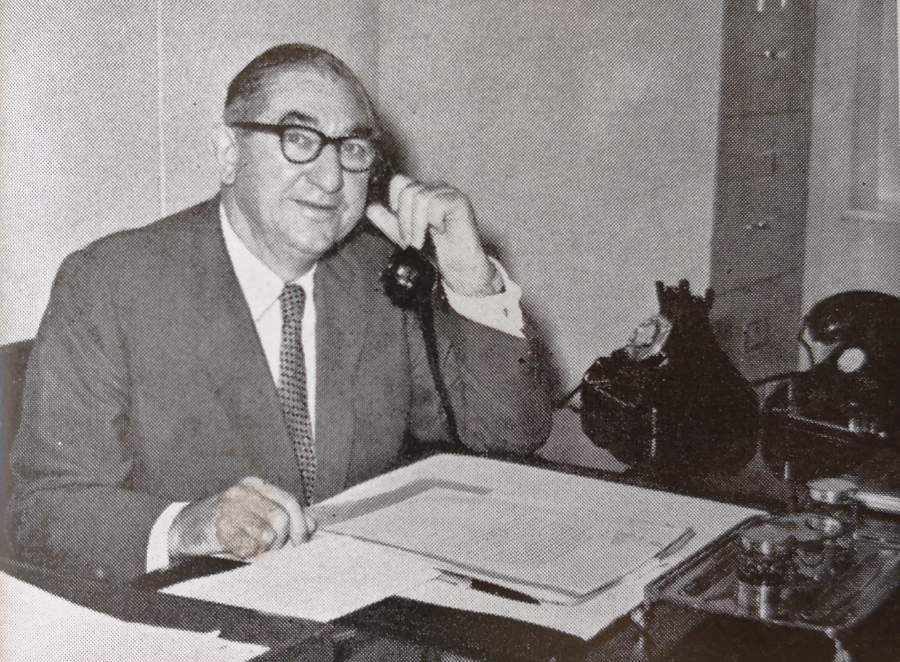 Wilcock was the first Governor of Bank Negara.

This successful synergy primarily resulted from the sound leadership provided by Bank Negara’s first Governor, Wil¬liam Howard Wilcock. An Australian citizen, Wilcock already had a wealth of experience prior to his stint in Malaya. By 1956, he was the deputy governor of the Commonwealth Bank of Australia (Reserve Bank of Australia now).

Arriving in Malaya in 1958, Wilcock initially took up the role of financial advisor to the Malayan government. He was tasked with finding out how the existence of a Central Bank could effectively help Malayans improve their lives as well as aid in the country’s future industrial development.

A year later, Wilcock was appointed by Yang di-Pertuan Agong as Governor as well as chairman of the board of Bank Negara. By the time his two-year contract expired in 1961, the Malayan government was so impressed with his work that he was given an extension of an additional six months.

Wilcock retired in 1962 and returned to his native country to fill the position of general manager of the Reserve Bank of Australia’s Notes Printing Division. During his tenure there, Wilcock was responsible for overseeing the introduction of the decimal currency in the country.

In an article published in the Straits Times in 1963, Wilcock gave a comprehensive overview of his time in Malaya. He was particularly proud of playing a role in the successful establishment of Bank Negara.

At the same time, he was happy that the awareness of Bank Negara’s supervision over the commercial banks had helped to make the people confident in the safety of the banks as depositories for their hard earned savings.

This confidence, fuelled partly by the general prosperity of the economy at that time, saw a large increase in bank deposits. They rose from $680 million in January 1959 to a record figure of $1,092 million by the end of 1962. This, in turn, enabled commercial banks to make substantial advances to secured borrowers without setting off any inflationary trends. 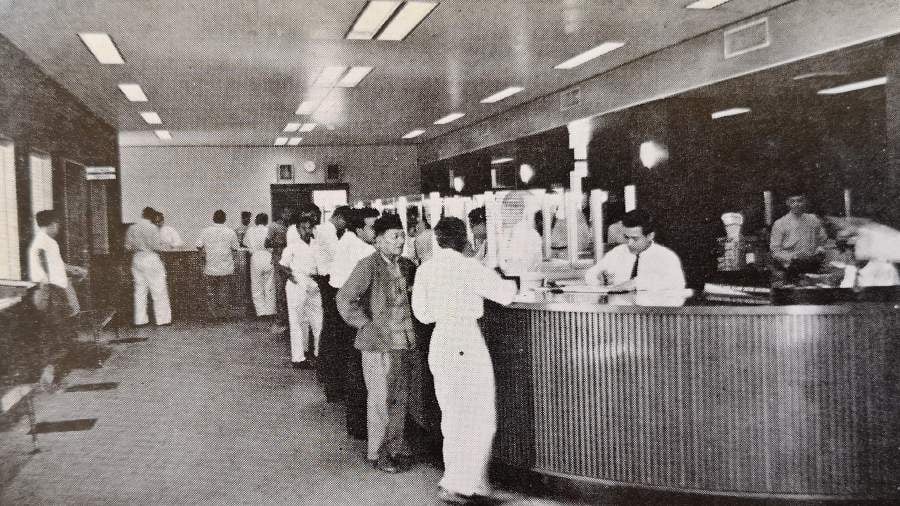 Scene of Bank Negara's public counter during the early 1960s.

“Excuse me... I think your number is up.” A voice jolts me out of my reverie. I turn and smile sheepishly at the man sitting next to me and thank him for helping to keep an eye out for my queue number.

During my transaction at the counter, I happened to glance at the prevailing fixed deposit rate on the information board. Surprisingly, it’s nearly the same at the 4.5 per cent offered by the commercial banks around the time when Bank Negara was set up.

Prior to Independence, these rates tended to mirror those of banks in the United Kingdom. Since its establishment, however, Bank Negara had endeavoured to relate interest rates more closely to the needs of the Federation while taking into consideration of the fact that free movement of funds had to continue unobstructed between Malaya and other Sterling area countries.

By exerting considerable influence in determining commercial bank interest rates, Bank Negara managed to successfully eliminate a great deal of cut-throat competition between commercial banks. For the first time in history, undesirable and unsafe practices related to the approval of highly speculative loans just for the sake of higher interest returns were halted.

On my way out, I chanced upon two Chi¬nese men deep in discussion over several stacks of new bank notes in their hands. Ruling out the notion that the money was for duit raya, I curiously inch nearer to eavesdrop on their conversation.

After some time, it becomes clear to me that the men are numismatists. Interestingly, their fascination didn’t lie in the general design of the bank notes. Instead, they were more concerned with the Governor’s signature as well as the prefixes and serial numbers printed on the paper money.

Recalling the recent resignation of Tan Sri Muhammad Ibrahim as Bank Negara’s 8th Governor, I soon realise that the men were collecting the soon-to-be discontinued new notes with Muhammad Ibrahim’s signature. Currency notes issued at the tail end of a Governor’s tenure tended to fetch a premium among serious bank note collectors.

Several years ago, the collecting world was caught in a frenzy when it was reported that 50,000 pieces of RM1 bank note signed by the 6th Governor, Tan Sri Ali Abdul Hassan, was released into the market by mistake during the transition period before his successor and first female Governor, Tan Seri Zeti Akhtar Aziz, took office.

The rare bank note, more commonly known as the ‘RM1 Aishah’ — as Ali Abdul Hasan’s signature seems to closely resemble the name — was accidentally released by the Bank Negara branch in Penang. A subsequent enquiry conducted revealed that, unlike the other branches throughout Malaysia, the Penang branch didn’t receive the order to stop issuing that particular bank note as similar ones bearing Zeti Aziz’s signature were already prepared and ready for distribution.

In order to prevent similar incidences from happening, all remaining RM1 currency notes signed by Ali Abdul Hassan in Bank Negara’s strong rooms were destroyed. At the same time, instructions were given to commercial banks to remove the mistakenly released RM1 notes from circulation if were they found among customer cash deposits.

News of the planned withdrawal sent the price of the RM1 Aishah bank note to stratospheric levels. At the height of the hysteria, a decent example could potentially fetch more than RM2,000! That alone was motivation enough for even non-collectors to jump onto the bandwagon.

Apart from the RM1 notes, which had the prefix and serial numbers ranging from CR 720 0001 to 724 9999, speculators began pushing up prices of other denominations bank notes which also had Ali Abdul Hasan’s signature even though there was nothing unusual about them at all.

This spillover effect drove prices up for several months but eventually the herd mentality wore off. Prices quickly backed down to a more realistic level, leaving quite a number of speculators getting their fingers burnt.

Before parting ways, the duo tells me that there are still evidence of more RM1 Aishah notes that have yet to be discovered. While driving home their point, one of the men shows me a recent Facebook listing claiming that a Penangite found three pristine copies while spring cleaning her parents’ home. As the notes were still in their green festive envelopes, it was speculated that the family must have given more away as duit raya several years ago. If only they had held back more!

With stories like this fuelling the collecting world, I’m sure that Bank Negara will be more careful when issuing currency notes in the future. At the same time, I also hope that the incoming Bank Negara Governor will do more to chart a clear course to help nurse our limping economy back to health.