Getting along with a psychopath at the work place

Psychopathy is traditionally a personality disorder characterized by persistent antisocial behaviour, impaired empathy and remorse, and bold, disinhibited, and egotistical traits. It is sometimes considered synonymous with sociopath.

Psychopaths are real people. They work with you, and for you, and could easily be your head of department or your superior. 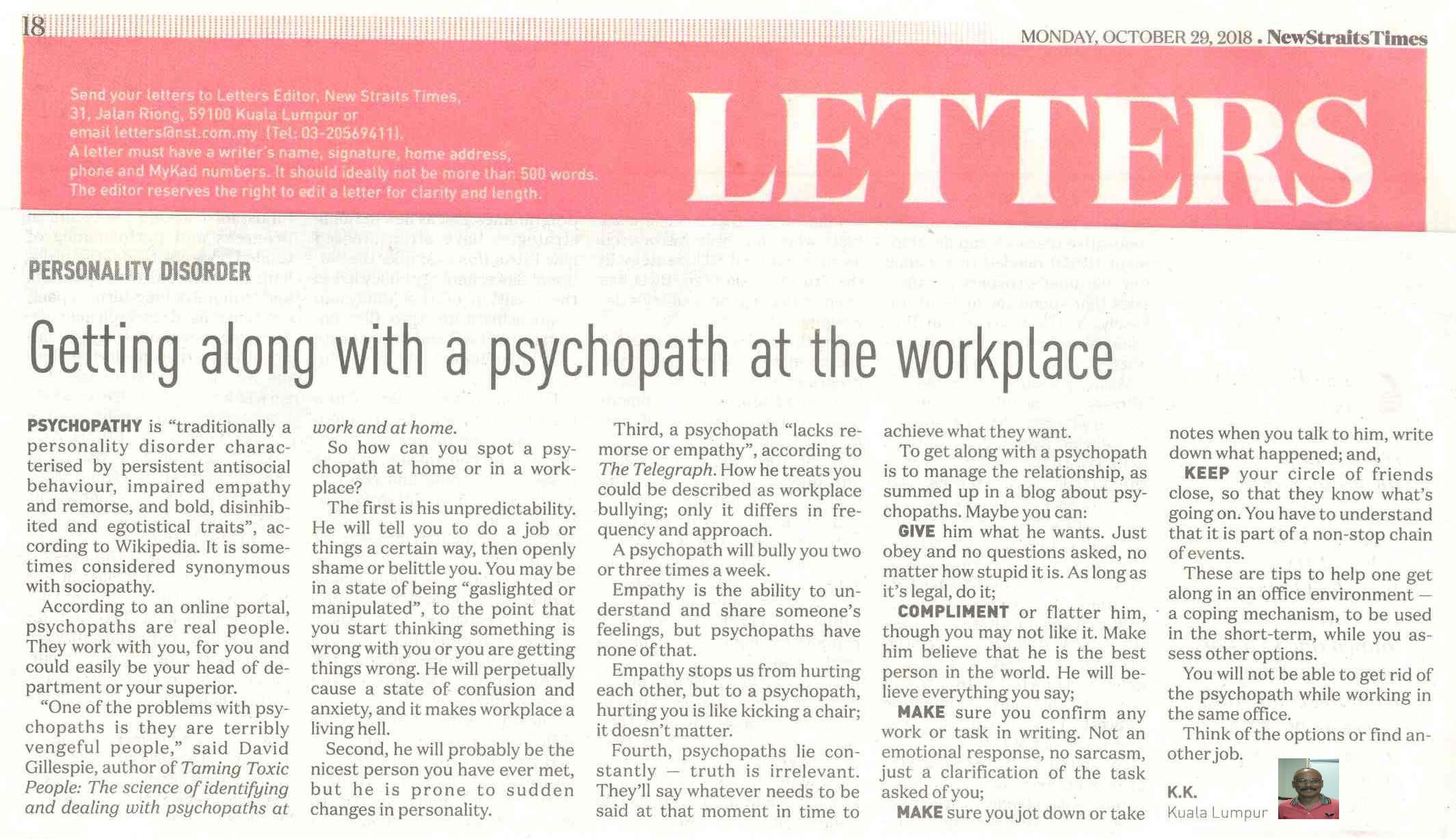 "One of the problems with psychopaths is they are terribly vengeful people," said David Gillespie author of ‘Taming Toxic People: The science of identifying and dealing with psychopaths at work and at home'.


So how can you spot a psychopath in a work environment or at your office?

The first being unpredictability. They will tell you to do a job or things a certain way, then openly shaming you or twisting their words against you.
You maybe in a state of being ‘gaslighting or manipulated’, to the point that you start thinking something is wrong with you or you are getting things wrong.
They will perpetually cause a state of confusion and anxiety, and it makes work hell.

Secondly, they’ll probably be the nicest person you had ever met, but after knowing them for just weeks or months, they are prone to sudden changes in personality

Should they head a department meeting with one person they might be lovely and charming, and then in a meeting alone with you, they're tormenting you.

Thirdly, psychopath has total lack of empathy. How they treat you could be described as workplace bullying; only it differs in frequency and approach.

A psychopath will do it two or three times a week or relentless bullying.

Remembering what empathy is, which is the ability to understand and share someone else's feelings, they have none of that.

We have empathy that stops us from hurting each other, but to a psychopath, hurting you is like kicking the chair, it doesn't matter.

As far as what they're concerned, they're just doing what needs to be done.

Fourthly, they lie constantly as for them, the truth is irrelevant. Honestly is irrelevant. They’ll say whatever needs to be said at that moment in time to achieve what they want.

Many would better off quit for a new job or new place, however it's not always possible for people to just up and quit, or at the very least it could take time.
To balance-up with them is to manage the relationship. Maybe you can:

Give them what they want. Just obey and no questions asked, no matter how stupid it is, as long as it's legal, do it. This maybe for the ‘soft and weak’.

Compliment or flatter them (though you will not like it), Make them believe they are the best person in the world. They will definitely believe everything. This is the key thing.

Make sure you confirm any work or task given in writing. Not an emotional response, no sarcasm, just a clarification of the task that has been asked of you.

Make sure you jot down or take notes when you talk to them, write down exactly what happened.

Keep your circle of friends together so that everyone knows what’s going on. You have to understand that it is a part a nonstop chain of events.

They these are stress able enough for everyone, it is just purely a coping mechanisms to be used in the short-term, while you assess other options.

You're not going to get rid of [the psychopath] while working in the same place. These are just to get you through, unless you are ready for a ‘grand battle’. Cheers!

Posts from This Journal “psychopath” Tag