Arguments against use of CEFR flawed

I REFER to the letter   “Adopt a Malaysian framework” (NST, May 28), in which the writer attempts to make a case for rejecting the Malaysian University English Test (MUET) in assessing the proficiency of English teachers.

I, too, have my reservations about MUET as an instrument to measure the English language proficiency of teachers.

The writer attempts to make a case against the use of the Common European Framework of Reference (CEFR). I find that his arguments are based on false assertions. 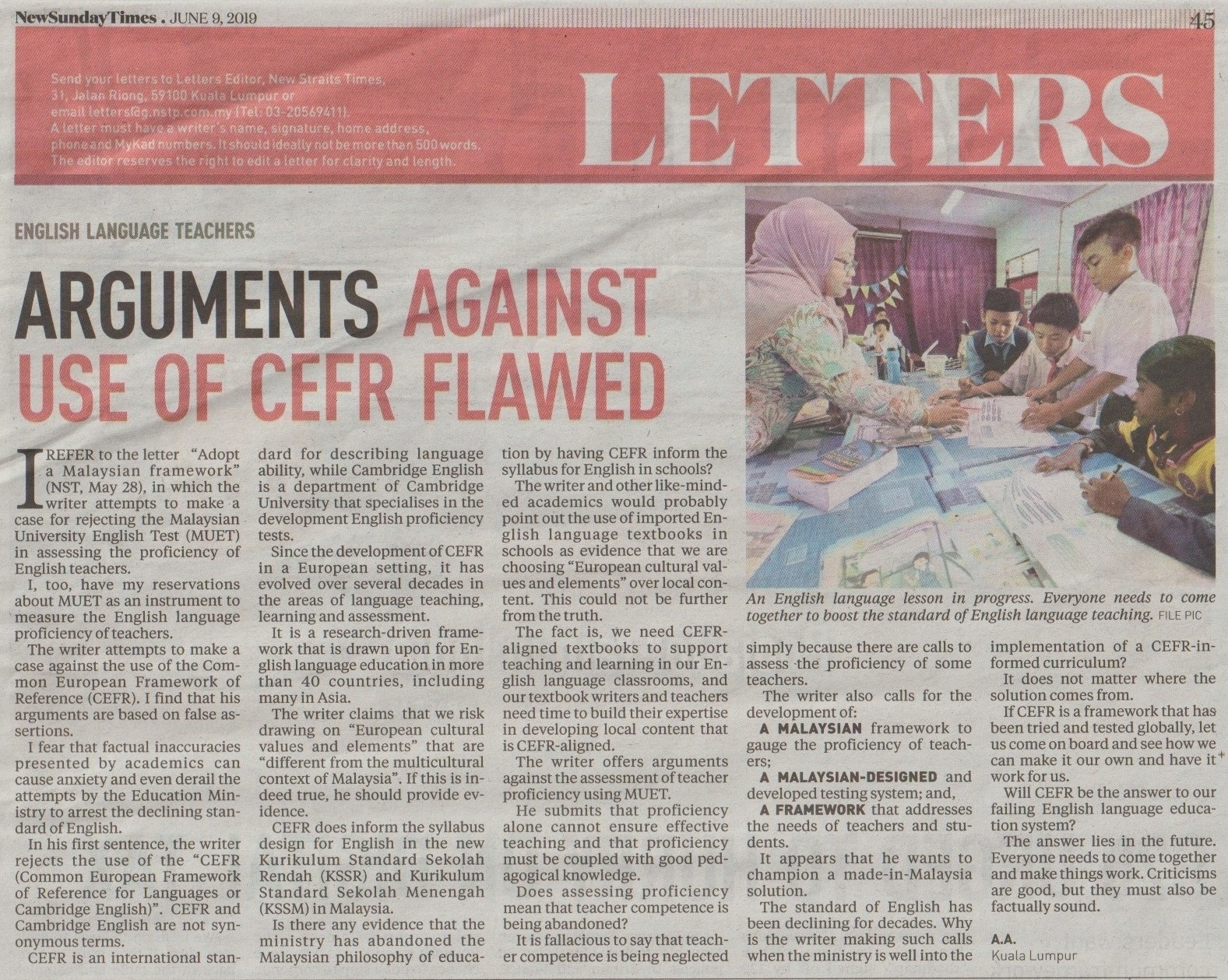 I fear that factual inaccuracies presented by academics can cause anxiety and even derail the attempts by the Education Ministry to arrest the declining standard of English.

In his first sentence, the writer rejects the use of the “CEFR (Common European Framework of Reference for Languages or Cambridge English)”.  CEFR and Cambridge English are not synonymous terms.

CEFR is an international standard for describing language ability, while Cambridge English is a department of Cambridge University that specialises in the development English proficiency tests.

Since the development of CEFR in a European setting, it has evolved over several decades in the areas of language teaching, learning and assessment.

It is a research-driven framework that is drawn upon for English language education in more than 40 countries, including many in Asia.

The writer claims  that we risk drawing on “European cultural values and elements” that are “different from the multicultural context of Malaysia”. If this is indeed true, he should provide evidence.

Is there any evidence that the ministry has abandoned the Malaysian philosophy of education by having CEFR inform the syllabus for English in schools? The writer and other like-minded academics would probably point out the use of imported English language textbooks in schools as evidence that we are choosing “European cultural values and elements” over local content. This could not be further from the truth.

The fact is, we need CEFR-aligned textbooks to support teaching and learning in our English language classrooms, and our textbook writers and teachers need time to build their expertise in developing local content that is CEFR-aligned.

The writer offers arguments against the assessment of teacher proficiency using MUET.

Does assessing proficiency mean that teacher competence is being abandoned?

It is fallacious to say that teacher competence is being neglected simply because there are calls to assess the proficiency of some teachers.

The writer also  calls for the development of:

A MALAYSIAN framework to gauge the proficiency of teachers;

A MALAYSIAN-DESIGNED and developed testing system; and,

A FRAMEWORK that addresses the needs of teachers and students.

It appears that he wants to champion a made-in-Malaysia solution.

The standard of English has been declining for decades. Why is the writer making such calls when the ministry is well into the implementation of a CEFR-informed curriculum?

It does not matter where the solution comes from.

If CEFR is a framework that has been tried and tested globally, let us come on board and see how we can make it our own and have it work for us.

Will CEFR be the answer to our failing English language education system?

The answer lies in the future. Everyone needs to come together and make things work. Criticisms are good, but they must also be factually sound.

Posts from This Journal “english” Tag