Many Malaysian are immoral?

With many controversies been in the media and news, there’s definitely something wrong with ‘people of Malaysia’.

Mental illness may be the symptom for most Malaysians especially for those who wants to be made known. 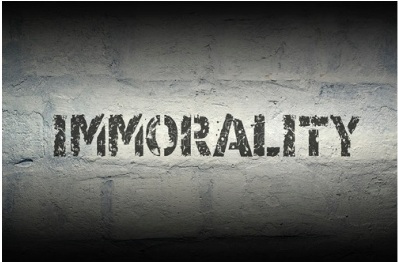 The last time was 'selfies and welfies' but now the more you potray yourself as a clown or jester, the more you'll be famous.


The more condemn you get, the 'highly profile' you'll be. True?

Whether consciously or not, many of us are immoral, i.e. 'hypocritical'.

We must be careful of those who are quick and strong in condemning and demeaning the morals of others, especially those who fail to perform their duties and responsibilities.

Most likely and the only ones who are willing to talk about morals are worse than their behaviour, but often neglect their behaviour and often take the light and violate their own rules.

In one study, researchers found that those who judge the behaviour of others are more selfish and often unfair to others.

Lately, Malaysians has learned to understand and apply the long-studied phenomenon known as actor-watching asymmetry, which partly illustrates our tendency to recount the bad deeds of others, such as our partner's unfaithfulness, their character, forgetting and associating the same practices done by ourselves the same situation.

This dual standardization can also explain the general feeling that the rate of excitement or impotence is increasing, where research shows that we consider the rude actions performed by outsiders are worse than what our friends or ourselves

We are actually a potential or unnoticed 'monster or ogre’. Studies have suggested that those who are exposed to sadism (people who love to hurt or disturb others for pleasure or satisfaction) every day (largely disturbing us) are primarily tended to be ‘monster or ogre’ over the line.

There are so many examples in the workplace that shows the chosen head of departments who love to hurt or disturb others for pleasure and yet no action taken against the predators.

A study published last year revealed how in a mood is bad, and exposed to other people's disorders; Most likely those involved in 'interfering with' others are twice as big.

In fact, the initial 'disruption' by some people can cause the situation to become increasingly negative and increase over time.

The superior often puts in mind the ineffective and psychopathic leader.

A very good example is defined by the American Personality Psychologist Dan McAdams concludes that the disruption and humiliation statement by President Donald Trump is “designed to scare."

If the assumption of McAdams's assessment is true, it is in line with the pattern of a wider discovery that the psychopathic nature is more common than the average among the leaders.

Malaysians leader seems to learn the habit of scaring others too.

The recently published meta-analysis concludes that there is a modest but significant relationship between higher psychopathic traits and leadership position.

This is important because psychopathy is also associated with low leadership quality.

We are also more sexually attracted to those with dark personality traits.

In the short term, to people who exhibit "traits of trait" attributes of narcissism, psychopathy, and Machiavellianism are the one who are enhancing these traits.

One study found that men's physical attractiveness to women increased when he was described as selfish, manipulative and insensitive.

One theory suggests that dark traits have succeeded in enhancing the 'communicative' quality of communication in terms of confidence and risk appetite. Is this important for our future?

A study in 2016, found that women are more interested in narcissistic men's faces, tend to have more children.

Maybe we do not have to be serious in this regard; this discovery does not say what we have in dealing with our basic instincts.

In fact, it can be said by acknowledging and understanding our weaknesses, of course we are able to better defeat them, and thereby nurture a better goodness of our character.