IT’S always fun when a bunch of city slickers heads into the jungle. More so when all connections to the outside world are cut off – no TV, no Internet, and horror of horrors, no cellphone signal.

A small group of us, some with young children in tow, had been planning a trip to a jungle retreat on the outskirts of Gopeng for some time.

The resthouse is nestled right in the heart of the jungle on a two-hectare site which the owner, Adeline Kuo, slowly developed over the years. The durian trees were in full bloom but she assured us that “durians have eyes, and will not drop on our heads”.

Our plan was to enjoy the nearby waterfall in Ulu Geroh and get up close and personal with the Rafflesia, the world’s biggest and stinkiest flower.

We were so thankful that the waterfall was just a short distance away, kept in pristine condition by orang asli in the village nearby.

Some of us still have vivid memories of our last jungle trek in search of a waterfall in Ulu Langat that took us nearly five hours. Our leader then described it as a stroll in the park but to us, it was pure torture.

There were other outdoor activities available, including white water rafting, but we were quite content to just take in the scenery and enjoy the solitude of being away from the urban jungle.

The following day, we went hiking. We were accompanied by three orang asli guides, two of them women, and I felt rather embarrassed that while I was huffing and puffing all the way up, they were just, well, taking a stroll in the park.

There was only one Rafflesia in bloom but we were all happy to be able to see it. It smelt terrible and the size was relatively small. Apparently, the huge ones are the species found in Borneo, not on the peninsula.

In the spirit of what I have shared often in this column, I saw the weekend getaway as a journey, not a destination.

We took our time on the trek, soaking in the wealth of information offered by the guides as they expounded on the value of the plants along the way.

The aborigines use different plants for everything from curing jaundice in newborn babies to chasing away spirits that threaten their crops.

There was much to observe along the way. The orang asli houses were basically wooden structures and the villagers still fish and bathe in the river.

We spotted satellite dishes on some houses, which made one member of the group remark that he should have come by to watch the Arsenal-Tottenham match instead of having to sing to us, accompanied by his son on the guitar, after dinner.

In the two days we were together as a group, there was real conversation going on. The smartphones were dead silent and there was no rush to check email every five minutes.

On Tuesday, a report in this newspaper revealed that Malaysians are among the world’s biggest workaholics, with almost 90% of the workforce working even when they are on holiday.

According to Expedia’s 2012 Vacation Depri-vation Survey, Malaysia was fourth on the list, after India, Brazil and Italy, with employees who cannot seem to “let go” of their work even during vacations.

Well, we certainly let go of our work last weekend. And I am pretty sure the office survived pretty well without us.

Deputy executive editor Soo Ewe Jin woke up extra early to watch the sunrise at the retreat and was reminded of the opening lines of that famous poem by William Henry Davies, “What is this life if, full of care; We have no time to stand and stare.” The STAR Online Columnist Sunday 25 November 2012

PETALING JAYA: Few folks are going to let the 12th day of the 12th month in the 12th year of this millennium - the last of triple date sequence - slip away without a big bang.

Many are planning to have their “big day” on that date (which will only occur again in a hundred years), touting it as an “auspicious time” for marriage and an “easy anniversary date to remember”.

The hotel sales manager in Penang said she was born on Feb 12 while Choi's birthday was on Dec 10, adding that “our first meeting was at noon”. 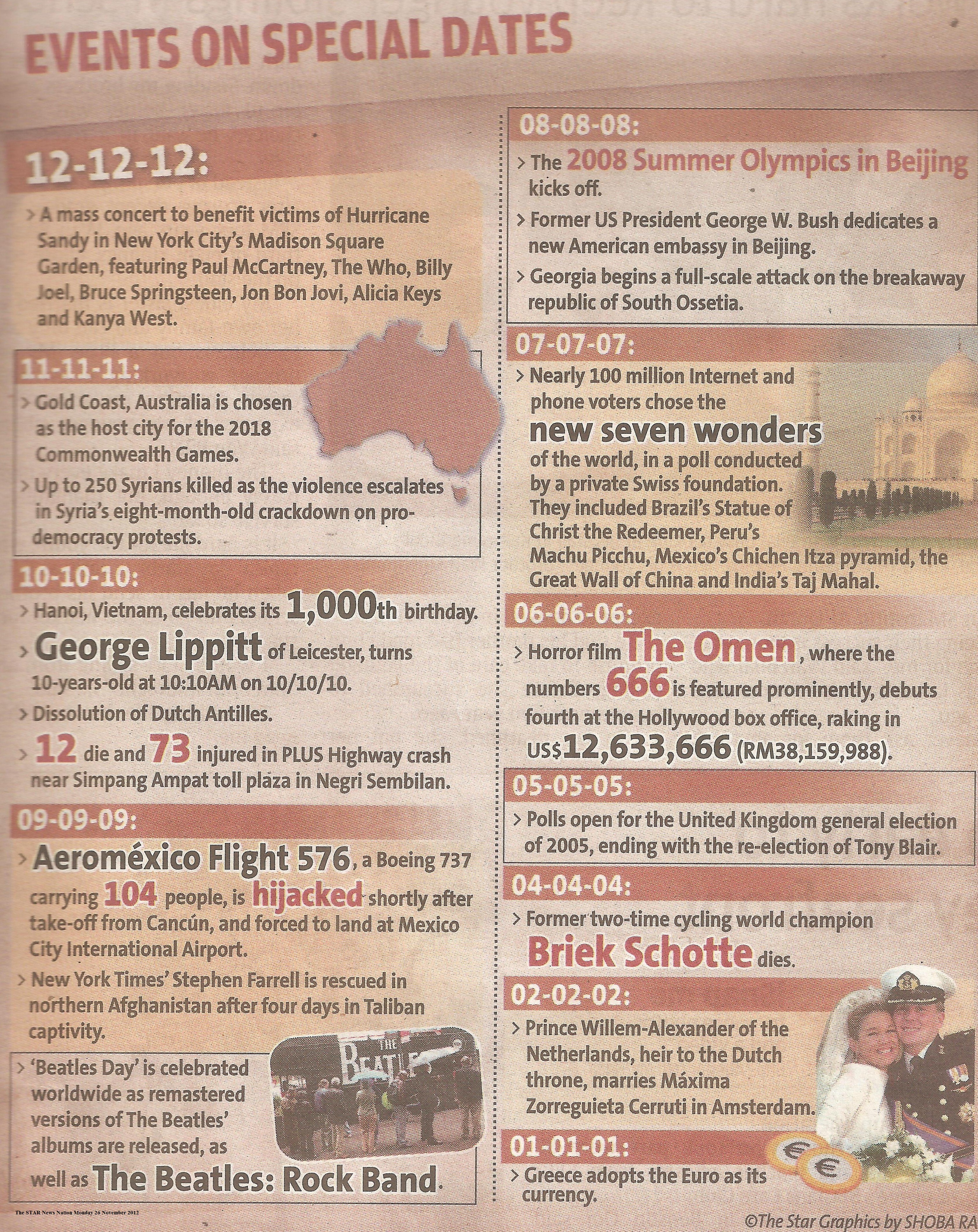 “He was my customer then. We realised that the number 12 has always been significant to both of us so we wanted to make the ultimate day of 12s as our special day,” said Liang.

For Bamani Lingam, 27, and Thevendran Sakruvathy, 31, their Hindu temple priest had recommended that they tied the knot on that date.

“When we were picking out the dates, the priest told us that 12-12-12 was a very auspicious date for marriage, according to our religion,” said Bamani, an assistant manager.

Thevendran said the date appealed to him, but for a different reason. “It's easy to remember when anniversaries arrive.”

“It's kind of a historic day for us since there's not going to be a 13-13-13,” he said. “We wanted to do something memorable, which we can talk about in the future.”

Meanwhile, a National Regis-tration Department spokesperson said it was bracing for a “wedding rush” that day.

Mass registration events, she added, would be organised at several of its state branches, adding that it was expecting a “record number”.

“There's not going to be another date like this in a century,” said Koay, adding that the hall registered 94 marriages last year, on 11-11-11.