It is argued that most educators are not trained to create valid assessments of student learning.

Educators choose assessment grading schemes for a variety of reasons. Some may select a method that reflects the way they were assessed as students; others may just follow the lead of a mentor or instructions given by their institution.

Marking and grading are determined after all student scores for the assignment or test are assigned. Often called norm-referenced grading, curving assigns grades to students based on their performance relative to the class as a whole. 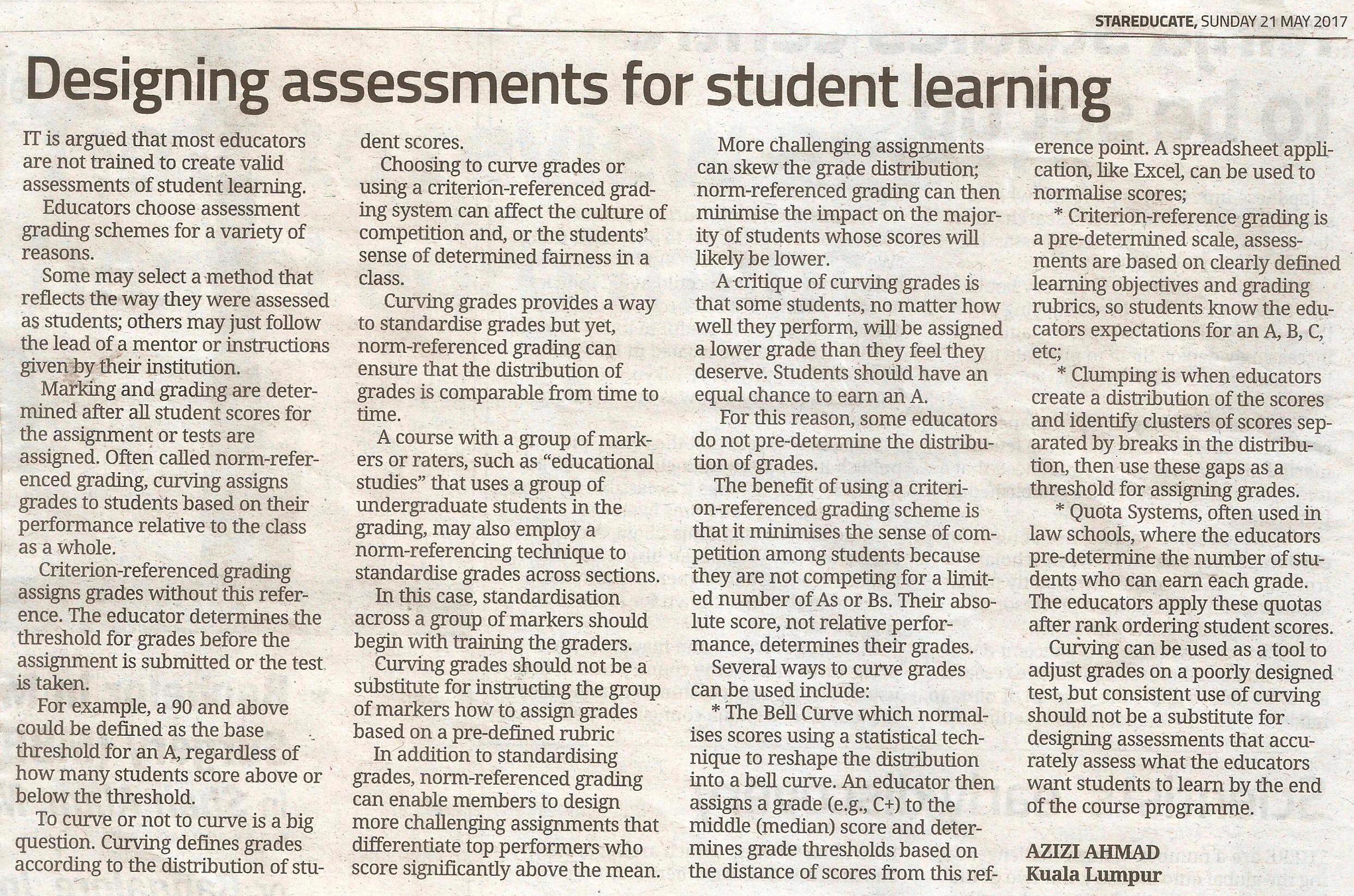 To curve or not to curve is a big question. Curving defines grades according to the distribution of student scores.

Choosing to curve grades or using a criterion-referenced grading system can affect the culture of competition and/or the students’ sense of determined fairness in a class.

Curving grades provides a way to standardize grades but yet, norm-referenced grading can ensure that the distribution of grades is comparable from time to time.

A course with a group of markers or raters, such as ‘educational studies’ that uses group of undergraduate students in the grading, may also employ a norm-referencing technique to standardize grades across sections.

In this case, standardization across a group of markers should begin with training the graders.

Curving grades should not be a substitute for instructing the group of markers how to assign grades based on a pre-defined rubric
In addition to standardizing grades, norm-referenced grading can enable members to design more challenging assignments that differentiate top performers who score significantly above the mean.

More challenging assignments can skew the grade distribution; norm-referenced grading can then minimize the impact on the majority of students whose scores will likely be lower.

A critique of curving grades is that some students, no matter how well they perform, will be assigned a lower grade than they feel they deserve. Students should  have an equal chance to earn an A.

For this reason, some educators do not pre-determine the distribution of grades. The benefit of using a criterion-referenced grading scheme is that it minimizes the sense of competition among students because they are not competing for a limited number of A’s or B’s. Their absolute score, not relative performance, determines their grade.

Several ways to curve grades can be used like:

The Bell Curve where normalizes scores using a statistical technique to reshape the distribution into a bell curve. An educator then assigns a grade (e.g., C+) to the middle (median) score and determines grade thresholds based on the distance of scores from this reference point. A spreadsheet application like Excel can be used to normalize scores.

Criterion-reference grading is a pre-determined scale, assessments are based on clearly defined learning objectives and grading rubrics so students know the educators expectations for an A, B, C, etc

Clumping is when educators creates a distribution of the scores and identifies clusters of scores separated by breaks in the distribution, then uses these gaps as a threshold for assigning grades.

Quota Systems, often used in law schools, the educators pre-determines the number of students who can earn each grade. The educators apply these quotas after rank ordering student scores.

Curving can be used as a tool to adjust grades on a poorly designed test, but consistent use of curving should not be a substitute for designing assessments that accurately assess what the educators wants students to learn by the end of the course program.