It may not be serious to some but it may be a threatening enough to some like in the case reported of ‘Scary moment as group of 200 interrupts Syed Saddiq, family and friends at dinner’.

Home Minister Tan Sri Muhyiddin Yassin has ordered the police to take immediate action and identify the members of a mob who heckled Youth and Sports Minister Syed Saddiq Syed Abdul Rahman at a political event in Johor yesterday evening.

Fast actions indeed as both are from the same party and are ministers too. 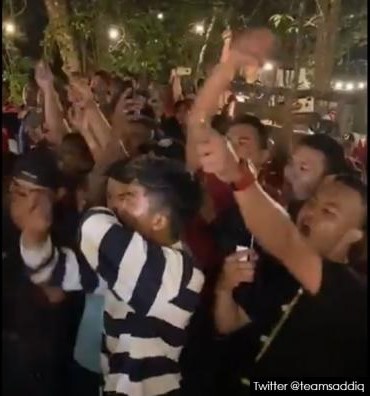 Reading from the media, it must be scary enough as Syed Saddiq was forced to climb over a fence to save him.

Why was Syed Saddiq picked among the ministers of PH and the last time (if anyone remember) he was also attacked by Papagomo. He must be the attacker’s favorite target.

Violent behaviour is any behaviour that causes another person any injury to the body that interferes with a person’s health or comfort, or that places them in fear of being injured.

The injury only has to be slight and it can include pain or bruising.

Violent behaviour is an offence and can carry very serious penalties.

If you are charged with an offence relating to violent behaviour get legal advice quickly.

You don’t have to make physical contact with someone to be charged with a violence-related offence.

Placing a person in fear that you will be violent towards them can also be an offence, including:

threatening to harm someone

being physically intimidating, such as standing over someone.

It does not matter whether you intend to harm the other person or not, as long as you intend them to believe that you will.

Receiving a personal threat is never a pleasant experience, regardless of whether the threat was provoked or not.

Responding improperly to a threat may increase the likelihood that the individual or group that is making the threat actually carry the threat out.

However, regardless of whether the threat comes in the form of a letter, phone call, email or in person, an informed reaction to the situation may help you avoid danger and even possibly diffuse the situation.

Responding with arguments, an elevated voice or reciprocal threats will only escalate the situation and increase the possibility that you are actually harmed.

Be sure to also avoid personal attacks of any kind. It’s best for you to stay calm

It is better to err on the side of caution and contact your local law enforcement authorities when you feel that the threat is real and imminent.

Take the threats seriously and quickly evaluate them to determine whether police intervention is necessary.

Depending on where the threat is made and what form it comes in, you may need to seek shelter or move to a new location.

For instance, a threat made face-to-face may require you to retreat to a neighbor or nearby business to avoid harm.

Collect as much information as you can about the threat. This especially applies to letter- and phone-based threats. Mark down the date, time, location and what is said.

Now, what’s wrong with Syed Saddiq that people seems to be angry with him and to the extend he’s to leave Johor.

He’s a promising young talent, qualified and future leader for Malaysia said some.

People threaten action so as to not have to take it. They hope that the threat itself will change the bad behavior in the other person. Taking action is a lot more trouble than promising to if the situation doesn't change.

To fellow Malaysians hurt not to others, if we don’t want others to be hurt.