The dramas played by the policy-maker of our country has now becoming absurdly ridiculous.

Of late, Malaysians are in need of someone or something that is truthful, trustworthy or genuine. 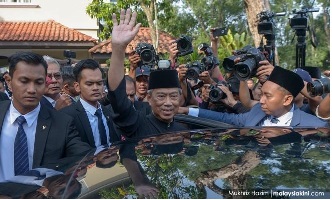 Truth is fundamental, and we must be brutally trustworthy with own self.

Many seem good being ‘actors’ or ‘pretenders of the universe’.

Statements made in the news or media do not represent the reality because you're afraid to exhibit that you too make mistakes.

Good leaders who inspire the souls of others do not treat fact telling lightly.
They recognize believe is less difficult to lose than to rebuild.

They build incredible relationships based on honesty, which in turn builds inspired organization.

Though no bloodshed was spilled on our day, as of The Ides of March, (better known as March 15th), still some said it marks an unfavorable anniversary associated with treachery and ill fortune.

We should not be steeped in superstition but still the month of March and the phrase ‘Ides of March’ is the month of tragedy.

The ides marks the halfway point of the month, most likely alluding to the day of the full moon, although historically the ides also corresponded to when bills became payable.

The Ides of March were at one point a celebratory day dedicated to the Roman god of war, Mars, complete with a military parade.

But the day in 44BC where Julius Caesar were killed by the Roman Senate had turned the month into superstitious  sign  of ill omen we know it as today.

Julius Caesar, who was at the time seen to be consolidating power to make himself emperor.

After ignoring numerous warnings, including those of a seer, who cautioned him to “beware the Ides of March”; Caesar was lured into an ambush set by members of the Roman Senate, who proceeded to stab the dictator 23 times before he died.

Shakespeare’s The Tragedy of Julius Caesar, written around 1599, immortalized this dark moment and gave us the classic line of dismayed betrayal, “Et tu, Brute?”

Is the happening likened to the current situation?

Well I guess, tragedy repeats itself. The PM interim was ‘overthrown’ and the guy who wanted to be the PM seems in the numb.

What then of ‘Et tu, Brute (You too, Brutus?)’. Most had known of ‘Brutus or Brute’. So many Brute and Brutus around in the circle.

Those involved seems to know what it takes to be in this situations. Those in powers know the corrupted; they know each other too well and each will be waiting to strike back normally.

There are some people, including some with immense amounts of power, who are about as far from leadership as you can possibly get.

But the fantastic thing is that power doesn’t make a leader. There is no entry barrier to leadership.

Leadership is the same thing.  Leadership is about behavior, not an inherent trait. If you want to be one, you can be one.

Good things about our leaders are their ability to take in new information and revise their perspective.

Learning isn’t always easy, or enjoyable, especially when it comes to understanding things like the systems of bias and oppression.

Leaders know this. They know they need other perspectives, other voices.

They know that echo chambers and groupthink are dangerous.

They admit that they were wrong. And that is a powerful thing. Really?

Leaders don’t just talk about changing, they actually change. And they do it through learning.

The difference between power and leadership is that a great deal of power is acquired on the backs of others.

And the leaders I admired most were the ones who reached out to others.

We would probably want leaders to provide opportunities for us. We do want them to share and care for us.

And I have no idea what the next few years will hold. It’s scary, and overwhelming.

But we Malaysians do hope to see amazing, incredible people speaking up for what is right.

We are still wanting of people willing to admit when they’ve been wrong, and trying to do better.

We love to see compassion and empathy and understanding representatives.

There will always be those who can’t tolerate change, who respond to what they don’t understand with hatred and abuse.

They will then have to sit in a darkness of their own creation and rage at the world.

We prefer to look to the bright spots, the leaders. No matter how wide the darkness spreads, it can’t eclipse their light.