No Sweeping Under the Carpet: A responsible government finds solutions

IT must be hard being at the centre of power in Putrajaya.  Everybody wants your slice of heaven, nothing you do is ever good enough and there's no shortage of armchair critics hurling accusations at everything you do, even if the policies, initiatives and programmes you put in place get the endorsement of the rakyat, economists and analysts.The opposition is the most vociferous of the lot, and understandably so. Putrajaya looms in their crosshairs like a pregnant duck in the middle of open season. And they WANT this duck.

Having engaged this "fight for Putrajaya at all costs" campaign for some time now, the opposition has pulled out all sorts of tactics including resorting to pejorative dog-whistle politics to concocting malicious stories to defame national leaders. 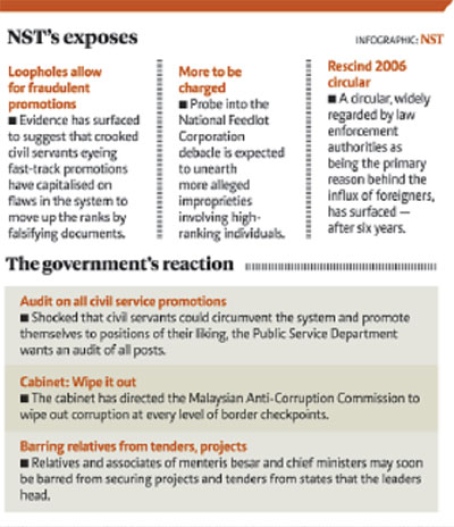 But to its credit, the manner with which the government tackles the bile-green matter hurled its way speaks volumes of its maturity and wisdom.

Rather than going on the defensive, like the opposition is wont to do, the government deals with each issue thrown its way by acknowledging the problem and then finding ways to deal with it.

There's no talk of damage control, mitigating the effects, sweeping it under the carpet and burying their collective heads under the sand. The opposition's cookie-cutter approach, on the other hand, is almost always not as elegant or refined.

Having been on the "frontline" for the past nine years in the federal administrative centre, I have been privy to the way Putrajaya is run. Over the years, I have exposed weaknesses and instances of corruption in the public delivery system.

Some even suggested that by doing this, this newspaper had been giving ammunition to the opposition to launch further attacks on the administration of Prime Minister Datuk Seri Najib Razak.

In the same breath, we were labelled as being a government lapdog. After a series of such "damaging" stories, this concern was sounded (albeit unofficially) when this paper splashed, back to back across its front page, these headings: "Brazen smuggling at the borders" (on how corruption at border checkpoints is costing the government hundreds of millions of ringgit annually) and "For RM10, smugglers can breeze in and out" (on how border guards can be bought by smugglers for a paltry sum).

Here's the thing. If I were based in an opposition state, Penang, for example, I would probably be barred from attending any of the state government's functions or be accused of having a hidden agenda to discredit it. Just for the record, not once have I been reprimanded by the administration nor has my journalistic objectivity been questioned. Neither have there been calls made to my superiors to rein me in. Instead, exposes on weaknesses in the system have been met with a genuine desire to improve inefficiencies and bring to justice those responsible.

This would be clearly evident to anyone flipping through the pages of this newspaper the very next day. For example:

"Rooting out bad apples" -- in a swift reaction, the Home Ministry has set up a committee to investigate claims of organised corruption at the country's border checkpoints.

It was not too long after the Chief Secretary to the Government Datuk Seri Dr Ali Hamsa assumed his post that we ran this story -- "Let off over graft -- Corrupt civil servants remain in service and qualify for promotions because their heads of department refuse to take action for fear of tarnishing their image and that of their departments".

It was learnt that the top civil servant wasted no time calling in those who were aware of the matter to get an idea of the extent of the problem. Soon after, a system to counter this was set-up. And we carried the story -- "E-screening of officers -- A foolproof integrity screening system for the civil service has been introduced to ensure only the deserving rise up the ranks".

With great power, comes great responsibility. It's never easy to admit that there are bad apples or flaws in the system. No one likes to take a hit, but that's life. But the measure of a truly responsible government is its ability to take a step back, take a long hard look at itself, identify the problems, find solutions and finally, have the will and courage to see them through. And since 2008, this administration has not stopped doing just that.