DOMESTIC violence is acknowledged as a significant issue in Malaysia. In 1994, the Domestic Violence Act (Act 521) was finally passed by Parliament, making Malaysia the first Asian and Muslim country to adopt such legislation.

Domestic violence is a pattern of abusive and threatening behaviour that includes physical, emotional, economic and sexual violence as well as intimidation, isolation and coercion.

The purpose of domestic violence is to establish and exert power and control over another. Domestic violence, also known as domestic abuse, spousal abuse, battering or family violence, is a pattern of behaviour which involves the abuse by one partner against another in an intimate relationship, such as marriage. 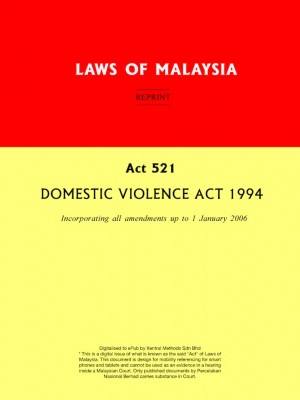 At present, the criminal justice system is too focused on the physical evidence of violent crimes. Coercive control and emotional blackmail, on the other hand, do not leave scars or bruises — but they are every bit as devastating. Due to this, in 2012, an amendment was made to the Domestic Violence Act 1994 (Act 521). It took effect on Feb 20 that year.

Under the new amendments, domestic violence is extended to include mental, emotional and psychological abuse. It also gives statutory foundation to the government’s definition of domestic violence, offering victims greater protection and making it the duty of the police to investigate. The Act is “gender neutral” and covers not only a spouse but also a former spouse, a child and incapacitated adult or any other family member.

It is important to demystify the fact that the Act only protects women. Men, too, can become victims of domestic violence.

The majority of the men who are victims of domestic violence refuse to lodge a report due to several reasons. One would be embarrassment or thinking they might be able to handle the situation better. Some male victims fear that they may be ridiculed for admitting their wives abused them.

It might not be easy to recognise domestic violence against men. Early in the relationship, the partner might seem attentive, generous and protective in ways that later turn out to be controlling and frightening.

Domestic violence against men may include both partners slapping or shoving each other when they get angry, and neither partner seeing him or her as being abused or controlled.

Signs and symptoms of domestic violence, especially towards men, include name-calling, insults or putting the victim emotionally down, preventing the victim from going to work, stopping the victim from seeing family or friends, a high degree of control on how the victim should spend their money, where he goes or what he should wear, acts jealous or possessive or constantly accuses the victim of being unfaithful and threatening the victim with violence or a weapon, and other abuses.

Many people still believe that violent domestic disputes should be worked out privately between husband and wife or within the family and that if the situation is really as bad as the victim argued, then the abused victim should leave their spouse rather than stay.